How to improve the quality of die cast aluminum

The function of die cast aluminum mold release agent is to improve the production efficiency and product quality of cast aluminum, while minimizing the negative impact of workplace and wastewater discharge on the environment. From the perspective of demolding, any factors that prevent the die casting from being successfully demolded from the mold are problems.  These problems include: sticky mold, porosity, fouling in the cavity, carbon deposits, cold partitions, white spots, and environmental challenges.

Soldering on the die is the result of the adhesion of molten alloy to the mold steel. High temperatures and corrosion can exacerbate mold sticking problems and are more common in special areas of the mold. The formation of a barrier coating between molten metal and tool steel prevents sticking . Some alloys are more prone to stick. Dongrun Casting uses advanced technology to develop a variety of die-casting lubricants to meet the requirements of different temperature ranges and alloy materials. Dongrun Casting's proprietary polymers ensure excellent die-casting effects at high temperatures. Silicone-free series release agents can be applied to lower temperature mold surfaces. 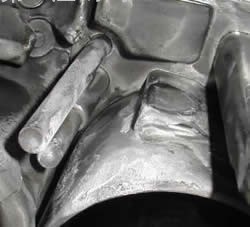 Porosity is the biggest problem in the die casting process. Die-casting processes are often used to make light parts from light metals to replace steel or iron parts. Since the inherent strength of light metals is lower than that of steel components, any situation that reduces the strength of components should be avoided. The small holes in the cross section of the casting will have a large effect on its tensile strength.

There are two main types of pores, one is stomata. Air holes are the result of the high-speed injection of molten metal into the mold. However, the presence of moisture in the mold or the decomposition of any organic compounds in the mold or cylinder will increase the porosity. Since all mold and punch lubricants may contain moisture, organics, or both, these substances can cause porosity problems. Dongrun Casting's well- designed products produce only a small amount of decomposition products, and all moisture is evaporated or blown dry before the molten metal is injected into the mold, thereby minimizing porosity. 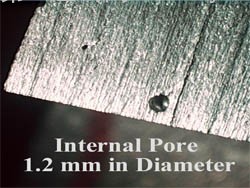 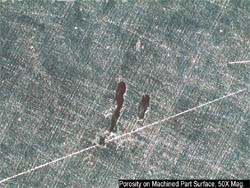 Porosity can also be minimized by setting overflow and exhaust ports. These two methods allow the air and any decomposition products in the mold cavity to escape from the casting before the metal solidifies. Use of appropriate size and filler material cylinder-rate may be the maximum extent to reduce the phenomenon of the pores, but the correct position and vent the exhaust slag packet size is crucial for the production of high quality castings. In addition, the choice of die-casting release agent will also affect the effect of the vent. Die-casting lubricant is usually sprayed into the mold cavity, but no matter how it is operated, the sprayed release agent may exceed the target area, such as spraying on the exhaust hole. This is what we usually call overspray.

Overspray on the die as the water evaporates, a lubricating film will form on the surface of the exhaust hole. Unlike the lubricating film in the mold cavity, the lubricating film formed on the surface of the vent hole cannot be completely removed when the casting is released from the mold. Over time, it will hinder the flow path of the escape gas. Dongrun Casting has recently focused on research in this field. Our latest die-casting release agent can minimize the overspray level of general die-casting release agents, thereby further improving the quality of castings. 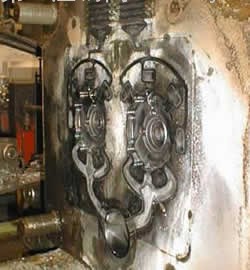 Shrinkage occurs because the liquid density of most cast metals is slightly lower than the solid density. This means that the volume of the metal decreases during curing. As long as liquid metal can enter the casting before solidification, shrinkage will be minimized.

Unfortunately, due to the many different cross sections of the casting, the appearance of "mould hot spots" is inevitable. This part of the casting remains liquid after the other parts are solidified, so shrinkage holes will form when solidified. The best way to solve the shrinkage problem is to improve the design of the cavity, strengthen the pressure and the metal temperature. Dongrun Casting die-casting release agent helps to solve the above problems by improving the cooling performance to control the occurrence of "overheating zone". 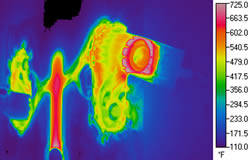 The dark impurities in a carbon or in-cavity build-up cavity are called "carbon" or in-cavity scaling. This is very different from welding, because these impurities are not adhered to the metal, but a thin film layer attached to the surface that can be removed without chemically dissolving the alloy. When the die-casting mold release agent is sprayed on the mold surface, only a thin film of the die-casting mold release agent is left after moisture evaporates, which can help mold release and avoid welding. This film is usually removed when the casting is released. In some cases, especially when the mold temperature is lower than the rated temperature, this layer of lubricating film cannot be completely removed, so scaling can occur in the mold cavity. The best solution is to reduce the amount of mold release agent. However, because the local temperature of each part of the complex mold may vary greatly, reducing the amount of die-casting release agent to reduce fouling may cause welding. Dongrun Casting die-casting release agent can form a perfect balance between high temperature and low temperature mold surface, thereby alleviating the above problems while forming unified protection. 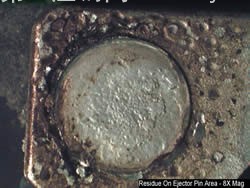 The main cause of scaling in the cavity is water that dilutes the release agent. Normally, demineralized die-casting release agent is recommended to use demineralized water. If hard water is used, the dissolved calcium and magnesium salts will precipitate after the water has evaporated. Since these components cannot be decomposed by the molten metal, they tend to form deposits in the cavity. Analysis of the chemical composition of the residue in the cavity usually reveals the presence of a mold release agent component, but the root cause of solid salts is the water that dilutes the release agent. The chaos of the water softening system can cause solids to settle in the mold cavity. 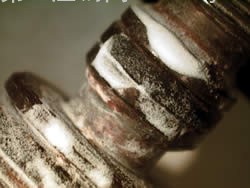 The surface of the casting sometimes shows traces of dark lines left by the path of molten metal. This is especially true for magnesium alloys and thin-walled cast sections. In extreme cases, the casting cannot even be completely filled. In other cases, crack-like things appear on the surface of the casting, in fact, the marks left by the two layers of metal surface are not fully fused when solidified. This situation is sometimes referred to as "cold insulation." This condition indicates that the casting has started to solidify when the filler is not full. This may be caused by too low mold temperature, too low melting temperature, or excessive cooling. Dongrun Casting die-casting release agent can be used to adjust the heat transfer speed of the mold, thereby effectively avoiding problems that may occur due to dissatisfaction with the casting filler. 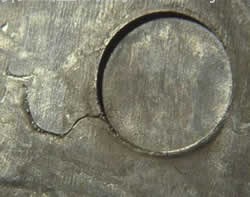 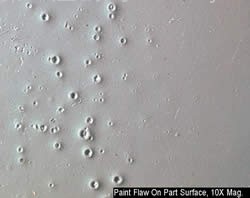 The earliest developed release agents were oils, which were manually used in hot molds before being injected into the molten metal . This will cause major harm to human health and safety, and Dongrun Casting was the first to develop a safer alternative release agent. Today's water-based die casting release agents can be used in most die casting operations. Water-based lubricants are usually concentrated emulsions that are diluted with water at the die casting site before use. As an industry leader, Dongrun Casting has always been committed to developing unique new formulations to meet the technical challenges facing the continuous development of the industry. Over the past decade, we have continuously improved product quality by increasing dilution ratios and reducing environmental impact. Recently developed innovative products can not only be used for extremely high temperature molds, but also can significantly reduce the fouling caused by excessive spraying on the mold surface and significantly increase the productivity of die casting operations. To understand the practical benefits of our die-casting processing aids for production, please refer to the following case studies: Auxiliary products add value, and product innovation improves production efficiency and product performance to save operating costs.

Dongrun Casting also develops a series of solvent-based die casting release agents for applications with shorter cycles and lower mold temperatures. In effective applications, low frequency applications and low operating temperatures of these products not only minimize the risk of fire, but also produce clean and bright castings.